Castles in the sky

Fairy tales and dreams are the very essence of romance, especially when thinking of castles and the charms that draw us to them.  Europe is rich in medieval castles and fortresses, and we discovered the best place to find them is in the Middle Rhine Valley, and the best place from which to view them and enjoy their spectacular presence, is from the river itself.  We fell in love and you’re bound to also.

Amazingly, there are 40 castles and fortresses to capture your imagination along the 65 Km stretch of the valley.  We’ve chosen a few favourites.  The camera worked overtime!  Every aspect of every castle offers magical views, and every bend and turn in the river, brings another castle.  There’s no knowing when to stop. 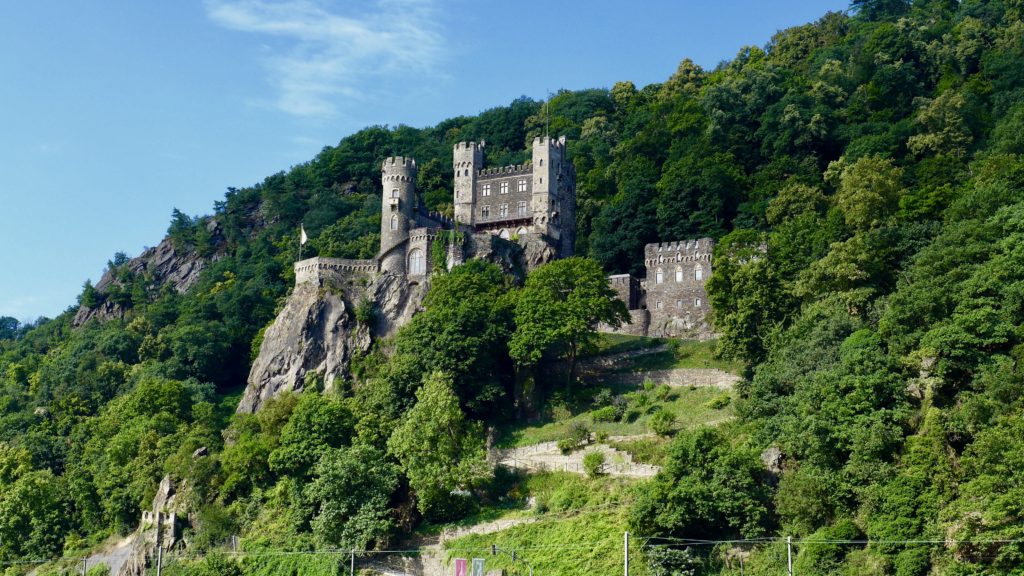 The river wends its way through steep wooded hills and lush vineyards that rise abruptly from its edge.  Charming townships are dotted along the banks adding to the spectacular views from the river.

Stahleck Castle and the immaculately terraced vineyards, make a magnificent backdrop for this charming village.  This is the perfect time to immerse yourself in the scenery with a glass of the local Rhine Riesling, as you float on by.

Soaking up the scenery on board MS Inspire Image: GRACIE

Sadly, many of the castles have crumbled into ruin, but some have been converted into accommodation, function venues and/or restaurants.  In some cases, parts of the fortress are left untouched, whilst renovation has taken place in another area.  Whatever their current state, each has its own splendour and romance.

These monumental edifices recall powerful times over centuries of history.

Schönburg Castle is thought to date back to 1149 and is a typical example of a modern conversion to hotel and restaurant that doesn’t compromise its romance and grandeur.

The unique setting of Pfalzgrafenstein Castle on the tiny Pfalz Island  in the middle of the river is simply jaw dropping.  A fairy tale castle jewel.   It was built for the sole purpose of collecting tolls from the river boats and like every one of these castles, has its own history and fascinating legends.

Whether you take a full river cruise, or dump the car and take a day cruise, there’s nothing quite so spell binding, as soaking up the romance of the Middle Rhine Valley.


Keep your pants on

Warriors – up close and personal